I love these Phylink cameras. I have them everywhere. Indoor, outdoor, and covert spy cameras. They are very reliable and feature packed. Product support has been very good for me.
The only problem I have widely experienced, is if you have motion detection set too sensitive, or you have the IR LED's on and bugs fly in front of the lens, the motion detection will fire so often that it trashes the Micro SD card. The SD card can only be written to so many times. Writing video to and SD card every time it sees a bug will end of life an SD card in any camera. This is a user problem, not a problem with the camera. If the camera is in a high traffic area, use a good quality or industrial Micro SD card. If you gete strange results formattting the SD card or the D card does not come back to the "Ready" state after formatting, its write life is probably exhausted.
The second most common problem with the outdoor cameras has been the antennas rotting away from the sunlight. You can buy them from Phylink, or Amazon. Look for a Universal 2.4G 5dBi WiFi Antenna for Security Camera/Router with RP-SMA Female Connector. They are about $8.
The third most common problem is the wire harness breaking at the overmold junction. The wire insulation cracks in the sunlight after a couple years and the wires break. This is a No LED failure.
The fourth most common failure that I've had is the camera getting hit by lightning or nearby lightning. This causes the WiFi to stop working, but you can still connect to the camera via an Ethernet cable.
I will discuss how I repair these issues below. 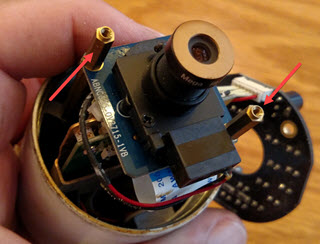 Unscrew the front of the camera like you would to install or remove the Micro SD card. Remove the two Phillips screws holding the Infrared LED PCB board onto the camera. Next, remove the two brass standoffs that are diagonally mounting the camera. 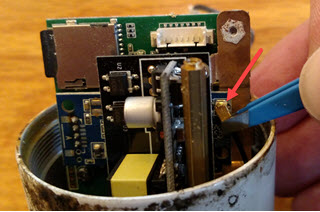 Use a pair of tweezers to pop the antenna connector off the WiFi module. It comes off vertical(Straight off, towards the camera taking the picture) from the WiFi module board. 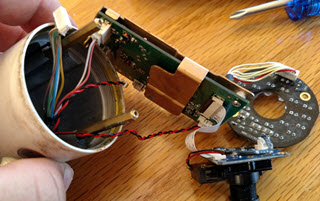 Carefully pull the CPU board outward from the housing with the Camera and the Infrared LED board attached. 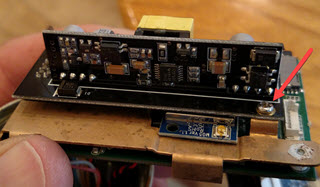 Remove the screw holding the POE(Power Over Ethernet) module, then unplug the POE module from the CPU board. This board is not required if you are not using POE to power the camera over an Ethernet cable. If you ordered the camera without the POE option, this board will not be installed. The Third party POE module solders in right-angle to a daughter board that plugs into the CPU board.

I don't know the part # for the POE module. Something like a Silvertel AG9000-S(Ag9120-S) or Equiv. I've never measured the output of the POE module Phylink uses, so I don't know if it is the 12v, 5V, or 3.3v, but I would guess 12V so it can drive the IR LEDs. Ground is Pin #7 and V+ output is Pin #8, the inner two pins on the 4 pin header. There are two groups of 4 pins connecting the POE module to the daughter board that then plugs onto the CPU board. Some high end POE modules have two extras/optional pins, 5 & 6, next to pins 1 through 4 for setting the class of power. The Phylink daughter board does not use these two pins. Most of the POE modules that have these two extra pins have pull-up or pull-down resistors to default the POE module to the highest power class.
If your camera runs on 12V from wall transformer, but does not run from POE, this POE module is bad, or the camera harness is bad. You could use a multimeter and ohm out each of the eight RJ45 pins to the header on the CPU board. If they all make connection, then you should replace the POE module.


Final Thought - If you have problems with the lens fogging up on these cameras, install a desiccant bag under the CPU board when you put them back together.