I bought a 2003 S10 with a 2.2L engine in it on Ebay. The truck had 122,000 miles on it, and a blown head gasket. The simple fix turned not so simple. We pulled the engine out of the truck, had the head milled 0.010", and installed new rod and main bearings. We put the engine back in the truck, only to find that had low oil pressure. Started reading online, and found out that these 2.2L engines are hard on cam bearings. Of course, we didn't replace the cam bearings.

So, we drove it this way for 9000 miles, with Mobil 1 10W40 High Mileage to keep oil pressure, then a rod started knocking. So, we removed the engine again, rebuilt it again, this time with cam bearings.

It is also worth noting that these engines from 98 - 03 have really short piston skirts, and will clatter like a diesel when cold if not perfectly fit to the cylinder diameter.
Contrary to Chilton's, and GM, these engines have a knock sensor, and the clattering pistons will retard the timing, and make your performance and gas mileage poor. 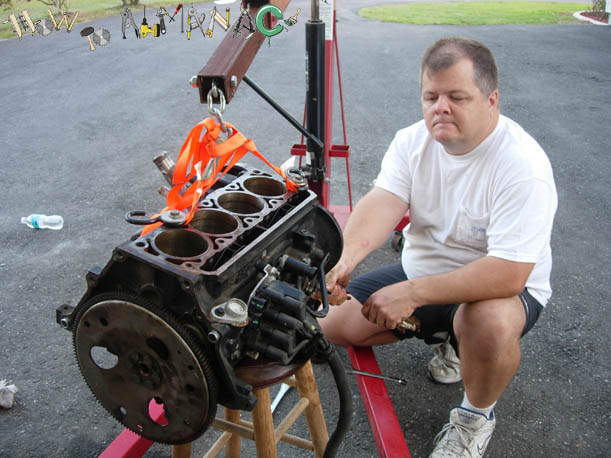 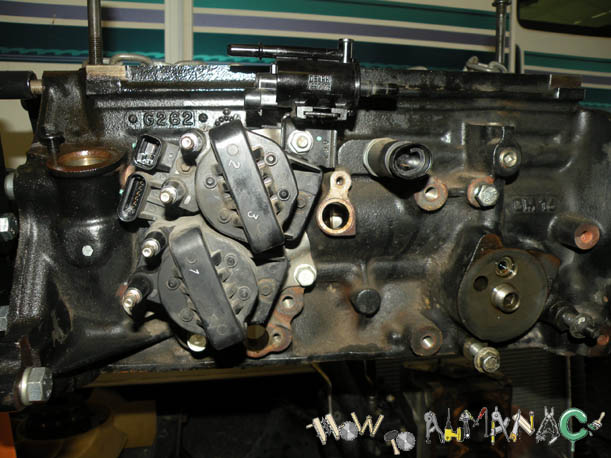 Engine Removed - Passenger Side of Engine. 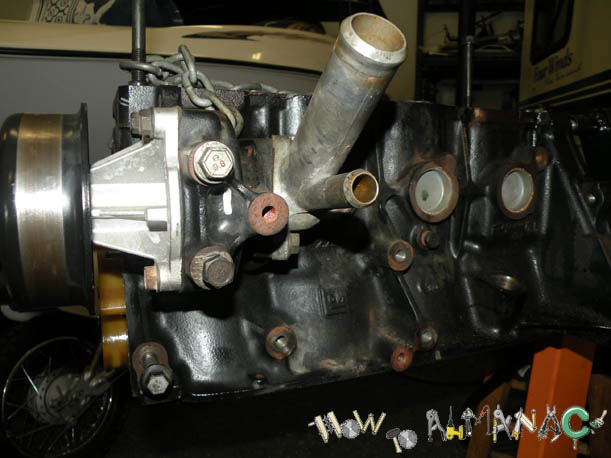 Engine Removed - Driver Side of Engine. Water pump and water inlet are aluminum, and will have to be removed if your machine shop is going to hot tank the engine. 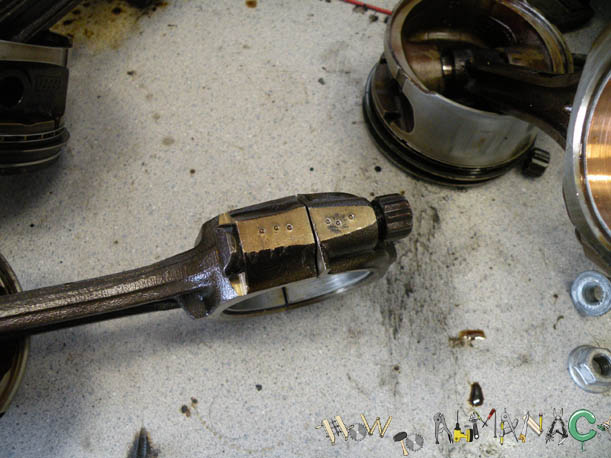 Engine Parts Removal - Before removing each rod, use a center punch to mark each rod, and rod cap. The front rod get ones punch, the second gets two punches, etc... 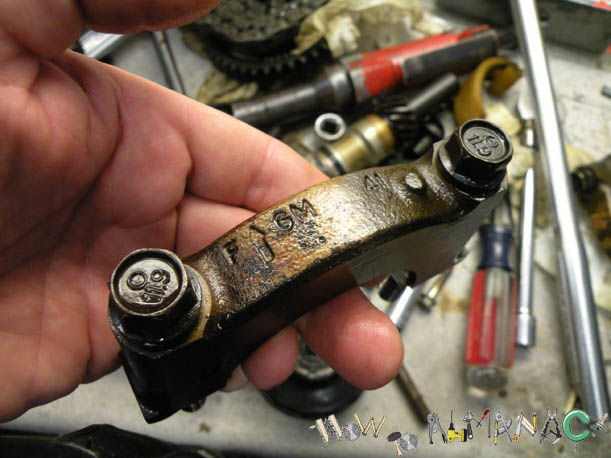 Engine Parts Removal - Before removing each main bearing cap, use a center punch to mark each one. The front bearing cap gets one punch, the next/second cap get two punch marks, etc... 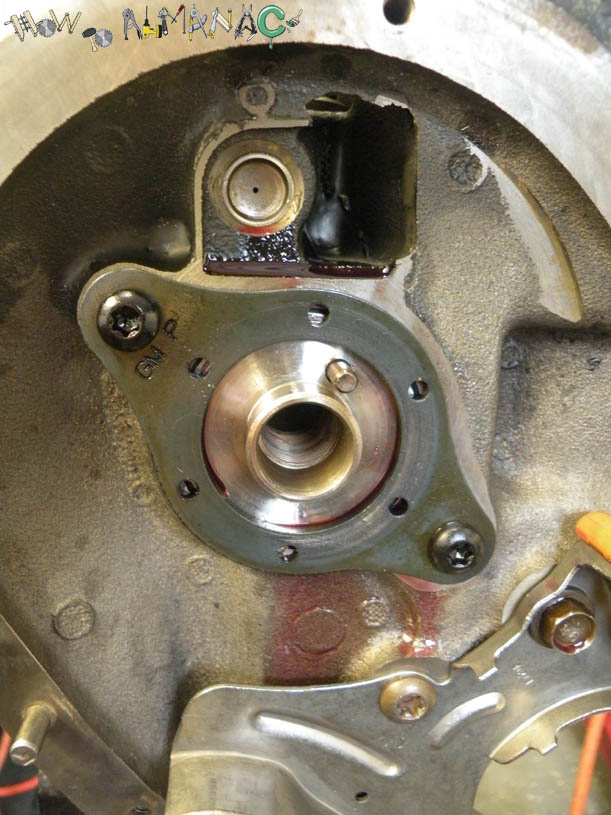 Engine Parts Removal - Remove the cam shaft sprocket, then the timing chain. Make sure you have the hole drilled in the oil gallery freeze plug. Early models didn't have this, and caused the chain tensioner to go out early. 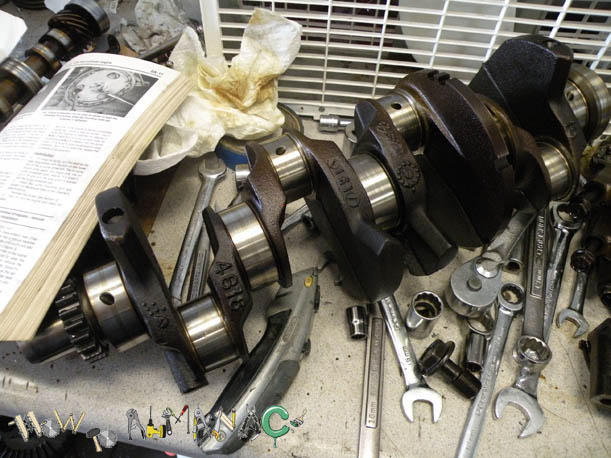 Engine Parts Removal - Remove the Crankshaft. The crankshaft was worn 0.004", so all surfaces will need to be turned down to 0.010" under stock. 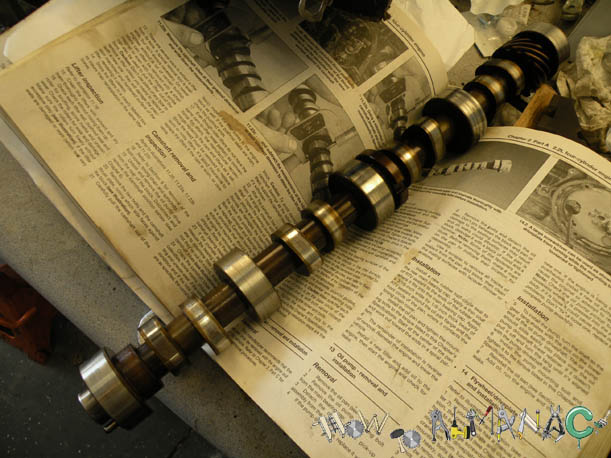 Engine Parts Removal - Remove the cam position Sensor from the Passenger Side of the motor, and remove the aluminum Distributor oil pump drive plug on the passenger side as well. The cam was only worn 0.0005", so it is ok to use. They do make 0.001" under cam bearings if needed. 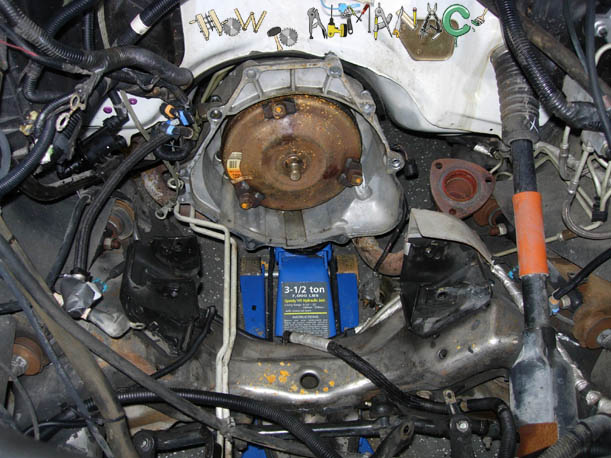 Prep - Pressure wash the engine compartment, and replace the front seal on the transmission if it looks like it make be leaking. Now is the time! 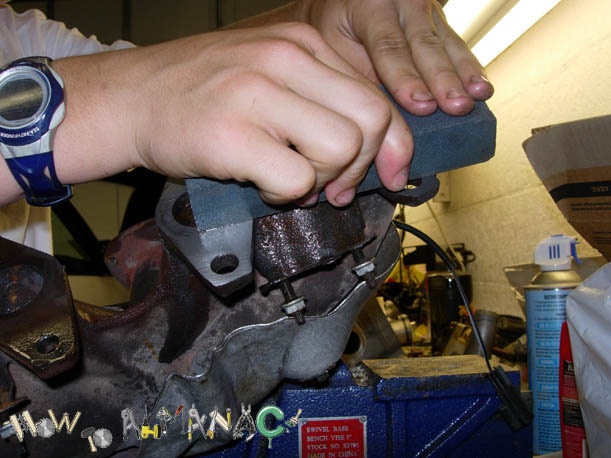 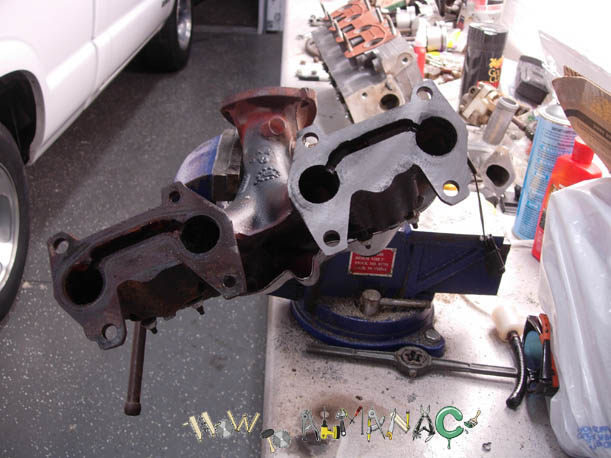 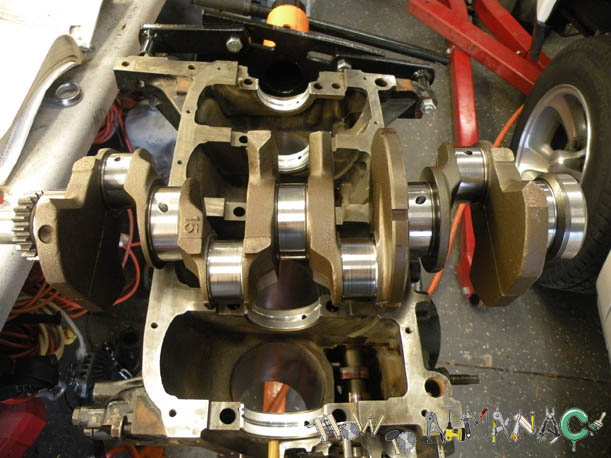 Prep - Block and crank back from machine shop. Main bearings installed in block. 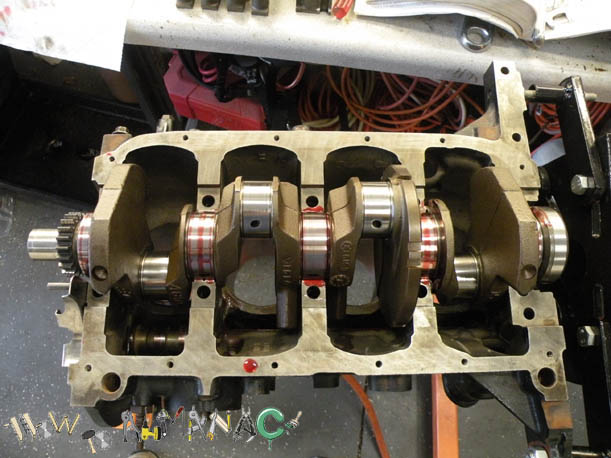 Assemble - Crank laying in block with assembly oil in and on it. 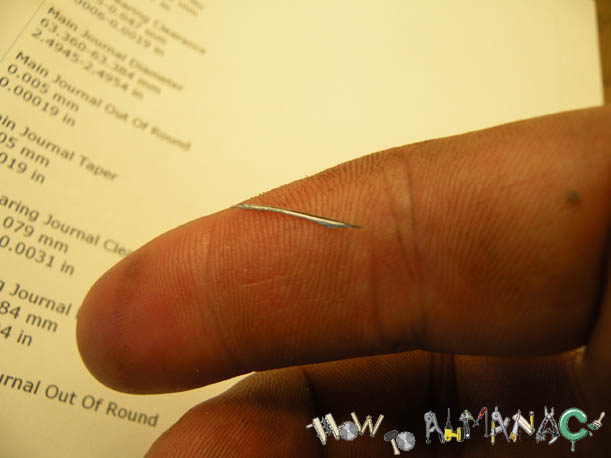 Assemble - Check each bearing before installing. I found this sliver in one of the bearings. This could have done a lot of damage! 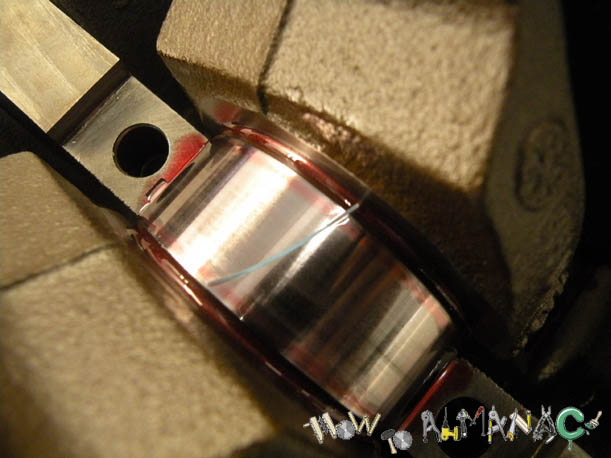 Assemble - Use Plastigage on each main bearing to check clearance. 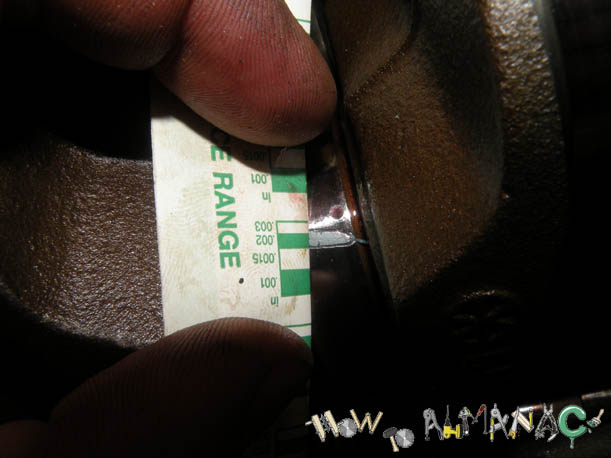 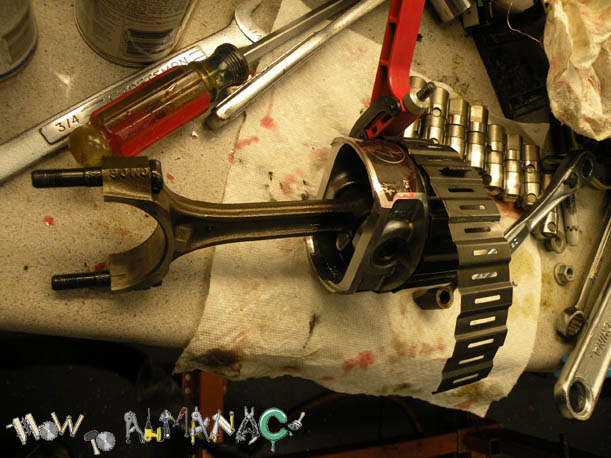 Assemble - Install the rings on the pistons. Install ring compressor on piston, then install each piston being careful not to hit crankshaft journals with the rod studs. Make sure to stagger the cuts in the rings around the piston. 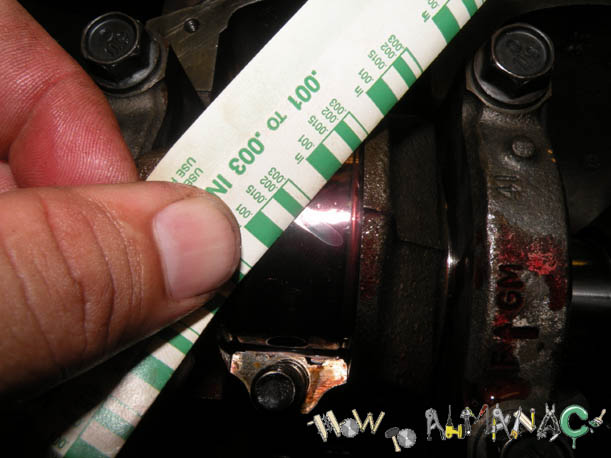 Assemble - Use Plastigage again to check the rod bearing clearance of each rod. The rod bearings were all 0.0015" to 0.0018". The machine shop did a good job.

Assemble - Install the flex plate, and attach the engine to the engine hoist to install back in the truck. 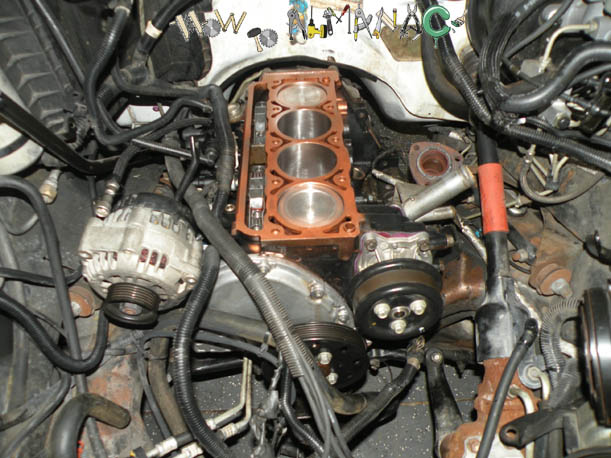 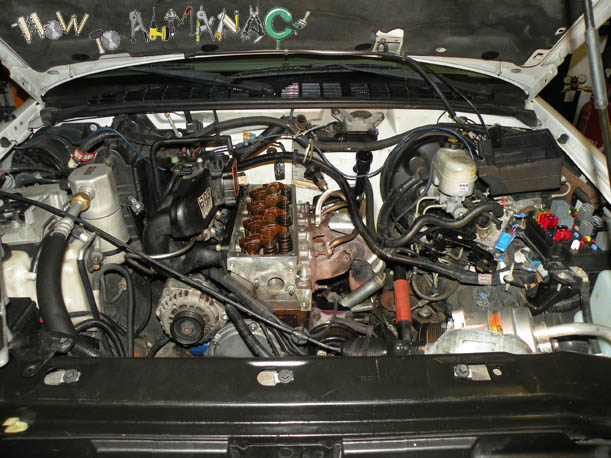 Assemble - If you had the head milled down 0.01", you need to use a 0.01" shim on the motor side of the head gasket. Be sure to place a drop of motor assembly oil on each of the head bolt threads, and head washer area so that correct torque readings are achieved. Bring the head bolts up to torque in three steps, then turn each head bolt 90 degrees more. Connect the fuel line, and evaporative canister fuel line. Bolt the transmission dip stick tube and fuel line to the intake manifold. USE NEW HEAD BOLTS!!!! 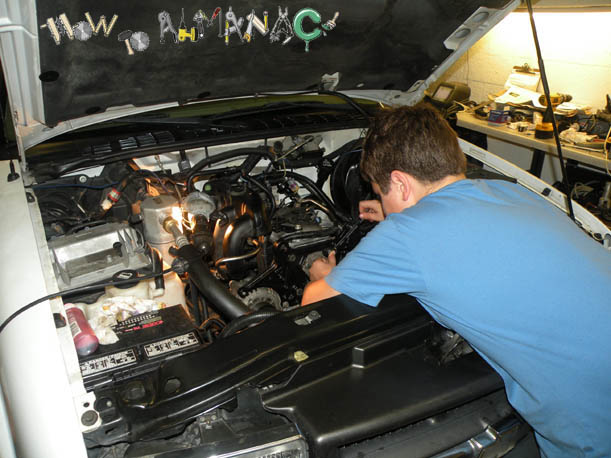 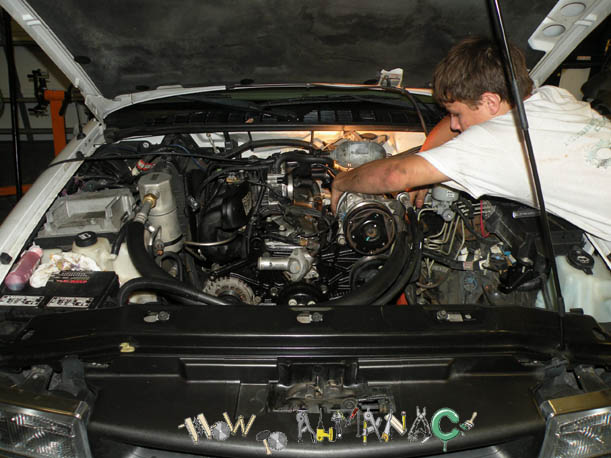 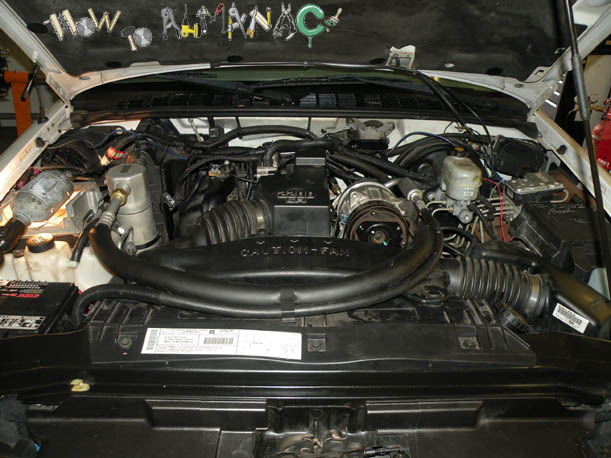 Assemble - Install antifreeze, and fire it up. Check the antifreeze after ten minutes of running. The engine has to belch, before it makes room for more antifreeze. 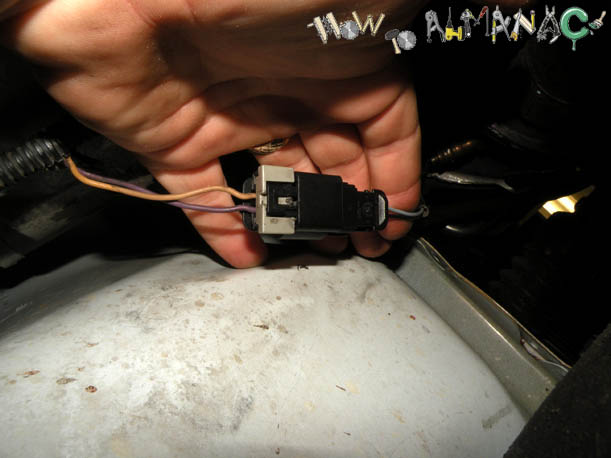 Foot Note - If you forget to unplug the oxygen sensor before removing the head, and you pull the wires out of the connector, this is how the wires are supposed to be connected. All of the manuals only show the 03 2.2L S10 having a one wire oxygen sensor. Ours has two wires, and you can see that the colors don't match up. 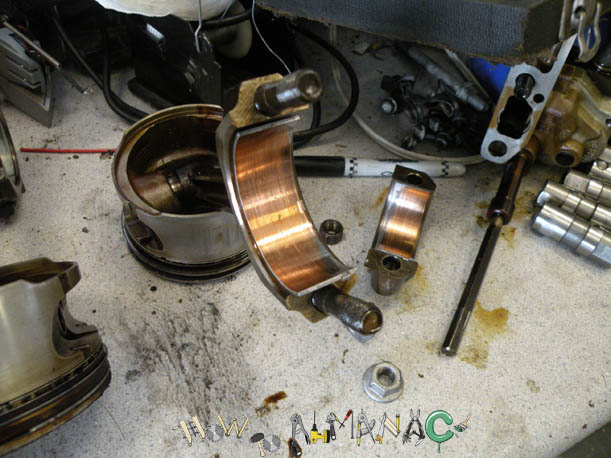 Final Thought - The S10 has plenty of power this time around, probably thanks to the tighter pistons providing higher compression, and no clatter retarding the timing. The oil pressure is 65 at an idle when cold, but drops to 20 at an idle after a hard run down the interstate. It drops to about 25 at an idle driving around town when it is hot. I'm running Mobil 1 10W30.

Always replace every bearing when you rebuild an engine. If the fan bearing is worn out, you will have to get the fan bracket from a Chevy dealer.