If you have an 80's though mid 90's Delco GM radio that has at least one speaker channel entirely out, or makes a popping or static noise, here is how to fix it.

Failure Mode #1: If one or more of the channels on your 80's to mid 90's Delco GM radio isn't working, there's a greater than 90% chance that it is the DM165 dual audio amps. The reason these DM165 Amplifiers go out, is because the 100uF gain feedback/filter capacitors dry up, and allow the DM165 amplifier chips to run open gain, and then destroy themselves. Even if the audio level is low on one of the channels, it is because half of one of the channels is damaged. This happens by connecting/touching one or more of the floating speaker outsputs to ground or 12V. NONE OF THE SPEAKER OUTPUTS CAN TOUCH GROUND, OR BE PARALLELED FOR MORE POWER. IT WILL DAMAGE THE DM165's.

Failure Mode #2: If one or more of the channels on your 80's to mid 90's Delco GM radio is making a popping noise when playing audio, there's a greater than 90% chance that it is the 1uF line level coupling capacitors. They develop both opens and short, causing DC to be passed to the input of the DM165 Audio amps. The DM165's use a 5.8v input bias. The volume / tone / Fade PCB uses a different bias voltage, depending if it is digital or analog. So these caps couple the audio signal, but not the different voltages.
10/30/14 Update:I have found that a lot of the Right channel low profile line level coupling caps have leaked acid onto the PCB and have eaten the traces away. You need to ohm out the traces from the caps to the amplifier IC's to make sure they are still conducting. A picture diagram is below showing where each of the line level and bias voltage caps get connected to.

If your GM Delco radio has the heatsink on the side with the four screws circled in Red(See Below), It's my opinion, having fixed numerous of these radios, that these caps are now 20-30 years old, and the Right channel caps reside right against & below a hot heat sink. After reading this, you will know how to fix them. 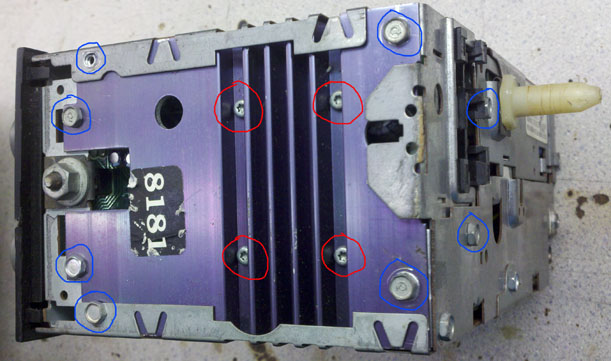 After removing the radio from the vehicle, you will notice that it has an aluminum heat sink on the side with four small torx screws(Circled in red) down in the fins. These four screws hold the heat sink to the DM165 amplifier IC's. You will need to remove the top and bottom covers from the radio by removing the (3) 1/4" hex head screws(Circled in Blue) from each cover. Next, remove the (3) 1/4" hex head screws from around the power connector. Then, remove the (2) 1/4" hex head screws that hold the heat sink attached to the front corner of the radio chassis. NOTE: Your radio may not look exactly like this radio, but if it was made around this time, it has the same Delco DM165 chips.

Remove the (4) small torx head screws that secure the heat sink to the DM165 amplifier IC's. You can't remove the wires from most model radios, since they don't have plugs connecting them to the main board, so you will need to just tilt the board up on edge.

Replacing the capacitors on the 130A821 Amplifier Board 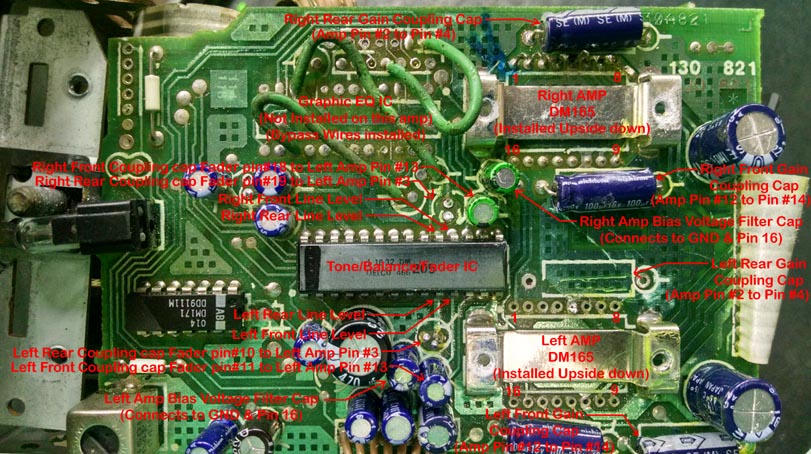 (Click for larger Picture)
You will see that there are two 100uF capacitors next to each DM165 audio amp. You will more than likely see that the acid has leaked out of the end of the 100uF capaictors, and has left a brown stains on the PCB. Clean these brown stains off before installing the replacement capacitors, since the brown is acid residue, and will damage the circuit board. Make a note of each capacitors polarity, typically the negative end is marked with a minus sign or a minus sign and an arow pointing to an end. The PCB negative is normally marked with a circle with a line coming out of it. Remove the two 100uF capacitors from around each DM165 and replace.

If you're very careful, you can check the DM165's in circuit. Make sure you replace the 1uF non-polarized caps by each DM165 first.

Theory of the test - The DM165's push(12V) & pull(Ground) each wire to the speaker to get more current/watts into the speakers. So, inside each of the speaker wire outputs on the DM165, there is a PNP pull up(12V) transistor, and an NPN pull down(Ground) transistor, and some circuitry to make sure these don't turn on at the same time, or the PNP will most likely lose the fight. So, you need to check each speaker wire so that you know if the DM165 output is being pushed(Pulled to 12v), and pulled(Pulled to ground) via the audio input signal from the radio.
Testing procedure - IF YOU TOUCH ANY WIRES TOGETHER, OR TO 12V or GROUND WHILE DOING THIS TEST, YOU WILL DAMAGE THE DM165's. Remove the power from the radio before connecting the wires of each step of the test. Make sure the balance and fader are in the middle position. 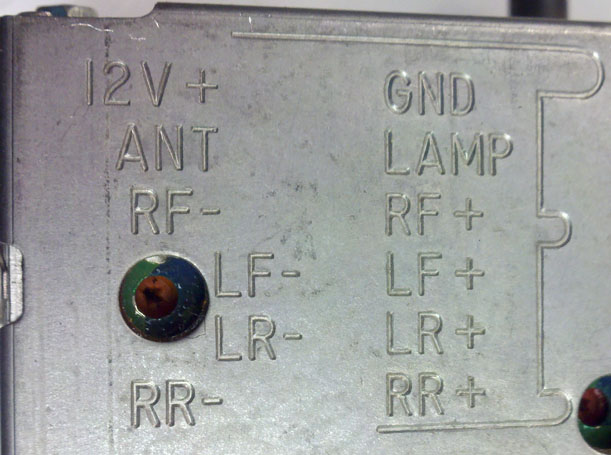 Identifying which DM165 is bad
With the power disconnected, using an ohm meter, use the following method to determine which DM165 is bad. From the test section above, connect one lead of your meter to the speaker output wire of the radio that didn't produce sound when the other speaker wire was connect to 12V or Ground. Turn the ohm meter to ohms, or continuity. Pin #1 of the DM165 is marked on the metal heat sink pad with a blue dot. Going around the DM165 in a clockwise direction(The DM165 is mounted upside down on the PCB. The metal tab is actually the bottom of the chip), the pins are numbered 1 through 16. The speaker outputs are on Pins #6, 7, 9, & 10. Using the ohm meter, find out which DM165 the bad speaker output is connected to. This is the DM165 that needs to be replaced.
Replacement Part Numbers
100uF 25v Axial Capacitors- Mouser Electronics 594-2222-021-36101
100uF 25v Radial Capacitors- Mouser Electronics 667-EEU-FR1E101B
1uF 16v Axial non-polarized Capacitors- Mouser Electronics 810-FK18X7R1C105K

Our you can find them at your local electronics part house, which are getting harder to find. www.mouser.com or www.digikey.com

The DM165's are hard to come by. www.partsrruss.com has/had a limited supply of brand new old stock Delco DM165's in the box. Sometimes you can find pulls at www.corvetteradios.com. You can also pick up radios at swap meets and junkyards. You can identify if the DM165's are used by the location of the four DM165 mounting screws on the side mounted heat sink. Normally at least one DM165 is good. The right side seems to be the one to go first because of the low profile 1uF caps mounted under the hot heatsink.
Adding Line Level outputs to your GM Delco Radio

(Click for larger Picture)
In the picture of the 130A821 amplifier board above, I have marked the four line level outputs on the Tone/Fader/Balancer IC. Connect these four outputs with a 1uF capacitor in series to the center conductors of four seperate RCA cables. Connect the shields of the four RCA cables to ground located next to the Tone/Fader/Balance IC.
Notice that this 130A821 board has the Graphic EQ chip installed instead of the EQ bypass Jumper wires. Also, repairs were made to missing traces around and under the Right channel 1uF coupling capacitors. Be sure to physically attach the RCA cable to the frame of the radio so they don't pull of the PCB when re-installing the radio.

Final Thought - The GM radios aren't super powerful, but if trying to keep keep or make your GM car or truck all original, this is the only way to get a radio that works. Even the radios that you get out of the junkyard will need at least one of the DM165's replace. Now you know how to do it. Have fun with your working radio.